GhostFriend provides a GUI for GhostScript, a tool that can convert PostScript and PDF to various other formats like JPEG, TIFF, PDF. PStoEdit from Wolfgang Glunz is an add-on to GhostScript that converts PostScript and PDF to vector formats like AutoCAD DXF and to WMF. Offering numerous options, these command line tools are very flexible, but not so easy to use. So here we have a GUI that helps us process a bunch of PDF or PostScript files. Formerly it was called "GoBatchGS".

The most important output formats are implemented, as well as the most important options, like resolution, JPEG quality, dithering and even the option to merge PDF output. It supports both the 32- and the 64-bits version of GhostScript.

Wolfgang Reszel has translated the captions in GhostFriend German Note: This is the old version, once created in Delphi.

To "install": unzip the zipfile and place the executable in a folder. Create a short cut to that executable. When you first run it, check the presence of GhostScript.
Obtain GhostScript
Obtain PStoEdit

Image to PDF converts multiple image files to PDF with a few mouse clicks. The tool is iTextSharp based, so needs the .NET framework (2.0 in this case). It replaces my "old" converter which was based on an existing command line tool for conversion of TIFF to PDF as it is more universal.

This tool accepts multipage TIFF's and a handful of other image file formats (TIFF, BMP, PNG, JPG, ...). It also offers the option to merge all selected files into one (multipage) PDF. 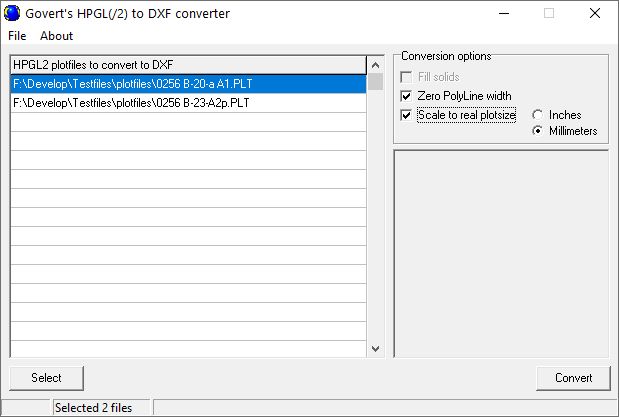 PLT to DXF (or rather: HPGL2 to DXF) This Windows tool converts HPGL and HPGL/2 to DXF. The program works ok, but it is definitely not a finished product. And I have no plans for significant further development as I believe that there is no big demand for this type of conversion. Imho its main use is in the case of a calamity when the original drawing file is lost, but a plot file is still available.

Another reason why I hesitate to put efforts in further development is that an HPGL/2 plotfile contains a lot of "low level graphics"; this is ok for the print on paper, but the converted DWG will also contain these low level graphics, making basically simple objects complex. So this low level DWG will very probably need editing. Convert a plotfile, then zoom in on text, solids, circles a.s.o. in the converted drawing and you will understand what I mean... More info